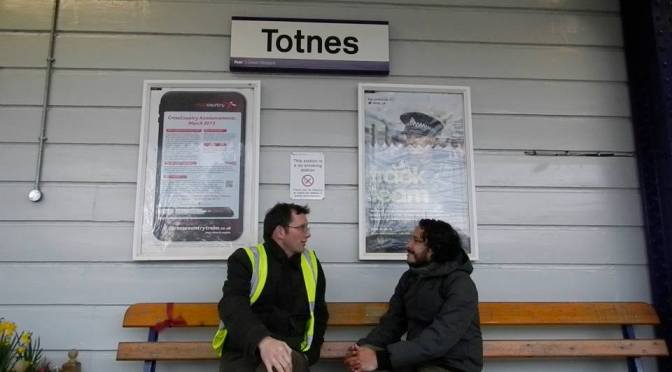 One of the early Transition Town initiatives was launched in Ensenada, Baja California, by an American expat, Robert Frey. Frey went to Queretaro, Mexico, in 2010 to a permaculture class taught by Raul Velez, founder of a nonprofit environmental education project called Ruta Ahimsa. Frey invited Velez to Ensenada to do some permaculture trainings, and shared his excitement about the new initiative he’d launched. Velez accepted the invitation – more to see Baja California than to learn about Transition.

“Actually I was skeptical,” Velez recalls. “I thought, OK, I live in a country that has been colonialized by European culture, and then the American way of life – another concept from another part of the world and we need to apply it now and change.’ But I was ignorant.”
Three weeks after Velez’ visit to Ensenada, Frey was found murdered in his own home. 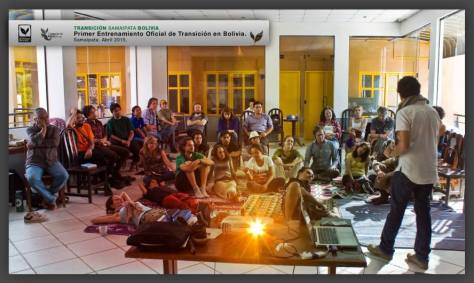 Raul Velez, Transition Network educator for Latin America, has given trainings all over the continent, like this one in Bolivia. Photo: Raul Velez


Velez was stunned. In the weeks after the tragedy, he contemplated what Robert had told him: “’I’m not there, so take this concept and try to work with it.’ Velez felt he should follow up, and so Transition Queretaro was born, and the movement took off. But not without some struggles – the first of which was an inner struggle for Velez. Despite his respect for Frey, he hadn’t overcome his resistance to taking the lead from colonial powers.

Still, the ideas behind Transition intrigued him, and in 2012 he traveled to Totnes – what he referred to as the “Disneylandia de Transición” – full of expectations for the Transition Training course. He was running very late and couldn’t find the place where the course was held; nobody had heard of it. He kept asking, and finally a shopkeeper gave him a phone number. “Here, call Rob,” she suggested. “Rob Hopkins?” he responded, surprised. “Yes – do you know him?” she queried, somewhat surprised. “Of course I know him!” Velez recalls the interaction with a chuckle.

He called from his Mexican cell phone and left a message requesting an interview to share back home, but didn’t expect much from Hopkins, who by now was an international celebrity. Hopkins returned the call, apologizing profusely because his schedule was full – he was filming a series of interviews with a European television crew. “When are you leaving?” he wanted to know “Monday at 6…”.”I’ll meet you at the train station at 5:15.” Hopkins pedaled up to the train station on his bike at the appointed hour and granted a lively interview.

“It was really interesting to meet Rob Hopkins because humble people practically don’t exist – people who are capable of developing big initiatives but are capable of keeping their feet on the ground – and Rob Hopkins is one of those few that I’ve met who, besides being a leader of a movement, besides being ahead of his time, he keeps his feet on the ground.”

The training left him with the sense that Totnes wasn’t so different from Queretaro – in the sense that, that wherever people were working to develop a more sustainable future, the energy, the ideas, the optimism were the same. He had a breakthrough in his way of looking at the European culture, however. He realized that the pragmatism of the Northern countries was an important counterbalance to the passion and emotion of Latin America.

“I felt that the discrimination inside of me gradually diminished; I realized that this was a tool from other cultures that they were offering to us… so I left Totnes feeling happy,” he said. “I left seeds from what I told them of the Zapatistas, and I brought other seeds of pragmatism, to put them into practice here.”

Like Velez, Michoacan permaculture designer and teacher Holger Hieronomi of the Tierramor permaculture training center saw the irony in the Transition proposal.

“It’s interesting that the first country that was industrialized in the world and started to use fossil fuels is one of the first countries where alternatives have started to develop to deal with the decline of those fuels,” he commented. Hieronomi was one of the first to take tools from the Transition toolbox and apply them in different contexts, some with more success than others. Born and raised in Germany, Hieronomi immediately grasped the brilliance of the concept; it was later, when he tried to apply it in his adopted home of Michoacan, that he began to see its limitations. “It was very much a European phenomenon; the difficulty I had was in how to translate it to the Latin American context.”

One thing that meant was to steer clear of the government, at least in Michoacan; while Hopkins encourages building alliances with local government leaders, Hieronomi quickly saw that the corruption of the local government would only cause problems in the long run. 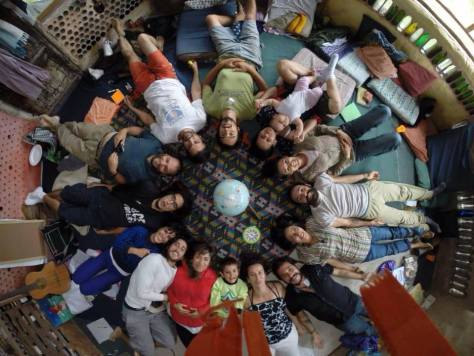 Velez ended up taking on the challenge of translating the Transition Movement to the Latin American context and became Transition hub coordinator for all of Mexico. He’s given trainings all around the country, including Tierramor, and all over Latin America. In Mexico, not surprisingly, the most active Transition group has been in Querétaro.

The group organized a series of tequios, or work exchanges, installing and rehabilitating gardens at the homes of the Transition members and then those of other organizations. They began to build adobe constructions, helping people to begin to trust in natural materials: adobe ovens for bread and pizza in the cafés and restaurants, and then a sauna and traditional temazcal or sweat lodge. They formed a barter group that at first was virtual, organized from Ruta Ahimsa’s Facebook page; with time a local café, El Viejo Varsovia, adopted it and started a very popular barter market every Wednesday in the plaza in front of the café. They launched the Kuni, a local form of currency, and they began using it in the market and other businesses around the city, strengthening the local economy.

There in Querétaro, Velez observed three very important principales: first, that there are no borders between Transition and other projects; some don’t even recognize that the projects were inspired by the Transition movement, but that’s not what’s important – what’s important is that they are done. It’s not important if they carry the Transition name, he says. In fact what is called Transition in other places is what is called Zapatismo in Mexico and Buen Vivir in Bolivia. “What is most important is the harvest,” says Velez. “It’s that together we are dong things that nurture processes to decodify information for a life without petroleum.”

Second, that to have a successful movement, one must plan one’s exit from the beginning. His success in this sense was obvious; Velez went to live in Tepoztlán two years ago, and Transición Querétaro is still going strong, with more than 50 people involved.

The third lesson, like the first one, was like that of Hieronomi in Michoacan: To be sustainable, small and authentic is better.

“Once we dropped the expectation of doing something big and just started doing concrete projects – it’s the message of Rob Hopkins, The Power of Just Doing Stuff – it was very easy at the local level to engage with the community,” said Hieronomi, who worked with other local activists on activities like a Fiesta del Barrio in a poor neighborhood and a mural project that reclaimed an abandoned park in his town of Erongarícuaro.

To Velez, the point is decentralization; indeed, small can be strategic.