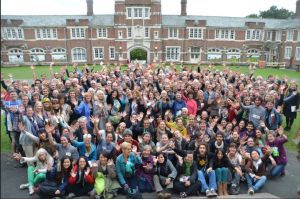 The 2015 Transition Network International Conference was the first we'd run since 2012, which was at Battersea Arts Centre in London.  Our home was the very beautiful Seale Hayne, near Newton Abbot, and a remarkable few days it was too.  While the amazing Transition Network team, supported this year by Dan Hurring of Another World Productions, do an amazing job of putting everything in place for the conference, something magical always happens when people arrive and the conference begins.  This year was no exception.

If you want a quick overview of the event, check out the Storify presentation here. The conference began on Friday with our Skills Day, with a choice of offerings including a Transition Launch training, Become Your Own Developer, Conscious Collaboration, REconomy and others.  This brought an early buzz to the venue while those coming for the main conference were still making their ways there. 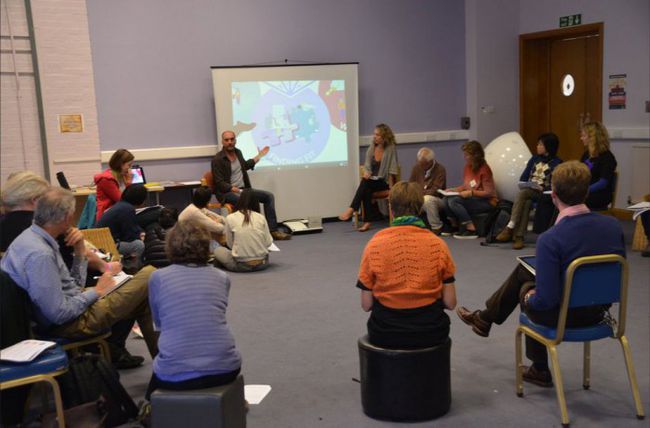 Nick Osborne's 'Effective Groups' Skills Day was one of the most popular. Photo: Mike Grenville.

The conference itself kicked off at 6.30pm, with delegates being welcomed by local choir Glorious Chorus, first in the courtyard and then singing us all into the Great Hall.  Hosted by Sophy Banks and Anna Maris, it featured a few short welcomes, including one from Juliet Davenport, CEO of Good Energy, the conference's main sponsors, who told those gathered "we're here to listen", as well as from the Dame Hannah Rodgers Trust, our hosts at Seale Hayne. 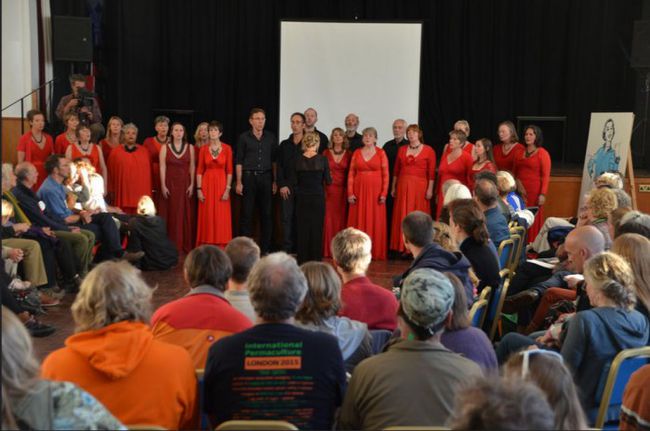 We then did our traditional mapping exercises, mapping the room from oldest to youngest, and then geographically in terms of where people had come from, and lastly the size of our settlement, and how long we had been doing Transition.  People with roving mikes took soundings from different places in the room so we could all hear snippets of who we were to be spending the next few days with. 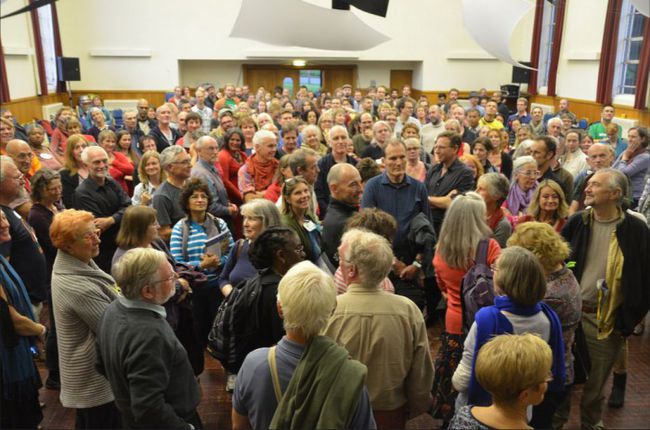 Anna from Columbia set the mood about right when she said, "I am so excited to be here ... I have bubbles in my stomach!"  The opening closed with Glorious Chorus, who sent people off out into the night, first to eat, and then possibly to the Bar, with a song.  Saturday opened with sunshine.

For the first session, people made their way down to the Sports Hall.  With the addition of people just coming for the Saturday, this was a very large group of people! 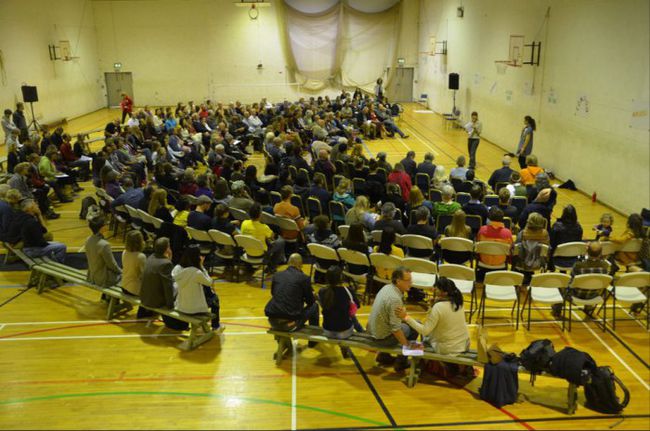 Juan del Rio from Spain and Josue Dusoulier from Belgium facilitated the activity.  Working in groups, they were asked to write down what they were bringing to the conference, what they were looking for, and what they are celebrating.  These were pinned up along the Hall's long wall, arranged under each nationality. 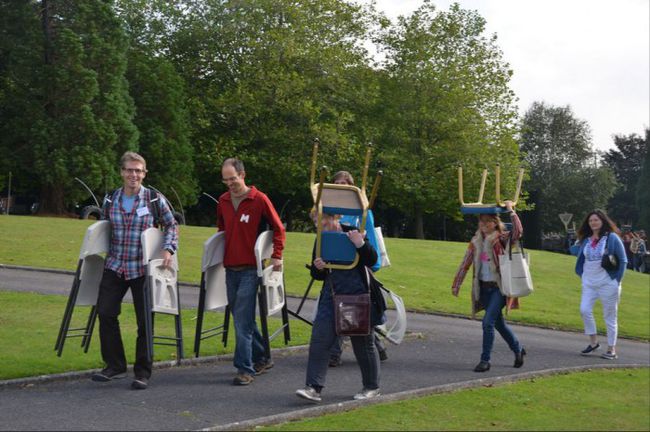 The first workshop session offered an embarrassment of riches.  There were workshops on, among other things, the Transition Healthcheck, Caring Town Totnes, how does change happen, Indigenous Wisdom, conflict resolution, REconomy, Common Cause and social media, followed by lunch in the sunshine, which also featured the launch of Howard Johns' new book , Energy Revolution. 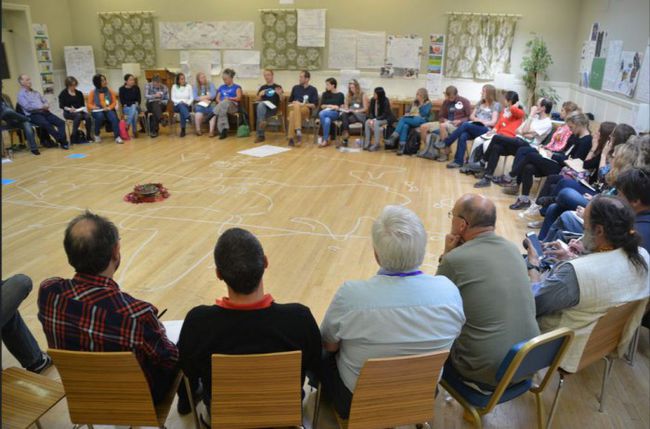 The afternoon began with another round of workshops, this time including Bike Maintenance, Flatpack Democracy, setting up a Local Entrepreneur Forum, Sociocracy 3.0, a Truth Mandala, Food Assemblies, and setting up a local currency.  I co-presented one with Sarah McAdam on Telling the Transition Story, presenting the Transition Story project we have been working on for the past year.  With so many great workshops on offer, choosing which to go to wasn't easy for people! 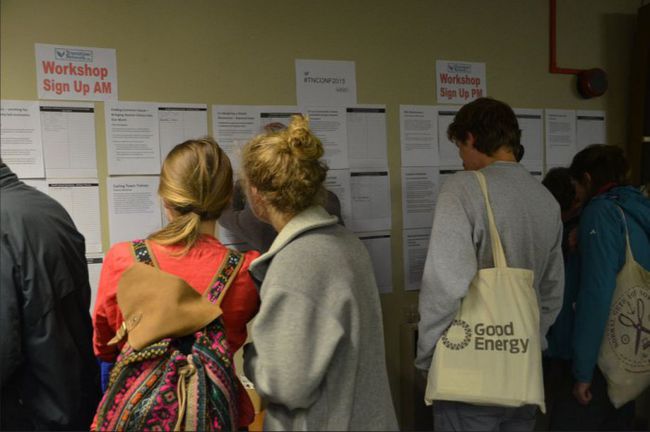 After the break, there was another, but more spacious, choice to be made.  Some people headed off to sit on the grass in the sunshine, to have a sleep, or to play football.  Some attended an amazing ritual, designed and facilitated by Sophy Banks called the 'Requiem for the Industrial Growth Society', which was widely celebrated as having been deeply moving and powerful.

Others went to the Transition Webcast, something we've never attempted before, but which went really well, potentially marking the beginning of Naresh Giangrande and Filipa Pimentel's new careers as TV presenters.  Move aside Jonathan Ross.  Here is the video of the Webcast:

Highlights included the Australian Transition group who attended in their pyjamas (it was about 3am there) and Pella Thiel, watching from Sweden, who tweeted a photo of how she was combining watching the webcast with preparing apples for some exotic culinary purpose.

I presented a workshop that introduced the 21 Transition Stories for COP21 project I have been working on, which was very well received.  Here is an audio recording of that.

This was followed by supper and then the evening cabaret!  Hosted by poet performer Chris Paradox (and his amazing jacket) it featured the rather wonderful Bert Miller, a 'Transition's Got Talent' spot and a disco.  It also featured the opportunity to unwind, catch up with friends, and sample delicious local beers.

Sunday again opened into a glorious misty but sunny morning, and was Open Space Day.  Many of you will have done Open Space, but it surely was not introduced in the way it was at this year's conference!  Presented like the briefing passengers get at the start of a plane flight, the practicalities of Open Space were outlined complete with flight attendants and  announcements from the pilot.

It must have worked, as everyone knew what to do and it all ran beautifully.  Here is a short video capturing how the room self-organised from chaos to conversation:

There followed two sessions with a wide range of topics.  You can see photos of all the write-ups from each session here.  Open Space is always an amazing thing to see in practice, once again it worked a treat.

After lunch we had the closing session.  Facilitated again by Sophy and Anna, it reviewed some of the key events of the previous day, and offered thanks to those who had made the event such a success, including "the Great British Weather".  We concluded with feedback from around the Hall as people shared how they had found the event. 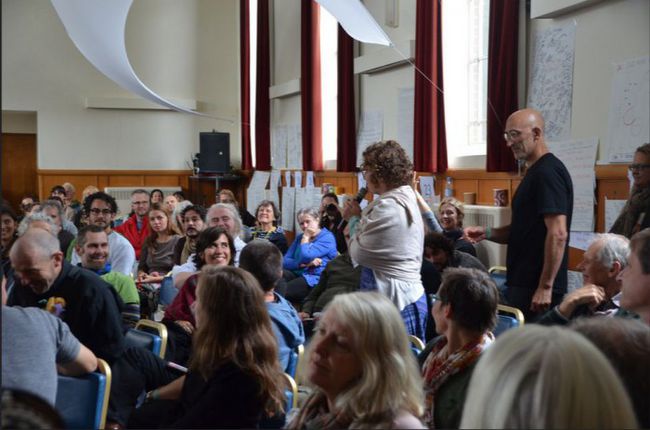 A few snippets of feedback that I noted down were:

"Transition Network has a long nose for sniffing out great things".

"Thanks for restoring my faith in humanity"

Everyone then filed out for a group photo in the sunshine, and that was that.

After many hugs, selfies, and exchanging of emails and phone numbers, people headed for home, apart from those who were staying on for the Hubs meeting the following day.

As one of just a handful of people who has been to every single Transition Network conference, what was different about this one?  Firstly the international nature of it was clear, with that international feel not just represented in those attending, but also in the facilitation team.  Secondly, the number of young people there was really heartening.  The presence of Elders was also a feature of it, for the first time they organised Elders Breakfasts, and had a 'Hearth' spot where they could meet with other elders (how people chose to define themselves as 'elders', or not, was left up to them!)

It felt to me like the conference where the balance between Inner and Outer Transition was most seamless, most balanced, most integrated.  Above all, it felt like such a privilege to be back among old and new friends, people doing such remarkable work in so many places around the world.

So, lastly, a few thanks.  Thanks to everyone at Dame Hannah's for their hospitality and welcome (special thanks to Carl Munson), to all our workshop presenters, to the technical team behind the Webcast who did such an amazing job and to everyone around the world who participated, to Bert Miller, Paradox and our Cabaret stars, to our Latin American self-entertaining singers and drummers, to our sponsors Good Energy, Triodos Bank and Naturesave, to Transition Newton Abbot and Transition Town Totnes for co-ordinating travel and couchsurfers, to the whole Transition Network team particularly Naresh Giangrande, and to Dan Hurring.  It takes a community to put something like this on, and a community to bring it to life, and we are deeply grateful to you all.